The general language courses focus on helping students develop integrated language skills and understand modern Korean language and culture.  In addition, the program offers a variety of Korean courses in a wide range of topics on Korean language and culture such as Korean studies through media, Korean civilization, Korean, and Business Korean.  We have also added an Internship course as well as a Practicum course in teaching Korean as second language.

We offer a Korean Studies Certificate that declares student’s advanced level of language ability and in Korean and foundational understanding of the culture, history, socio-politics, and religions of Korea.

The lower division language courses can be used to fulfill the GE foreign language requirements.

All Korean courses are part of the curricular for Asian and Pacific Studies and International Business Program.

The Certificate in Korean Studies aims to train and produce students who are linguistically able and culturally informed.  The program consists of two major components.  The first is to build students’ language proficiency in Korean in the areas of speaking, listening, reading and writing.  The second is to offer students foundational understanding of the culture, history, socio-politics, religions of Korea.  The Certificate allows students to focus on Korean studies, which cannot be attained through the existing degree or non-degree programs in the Department of Linguistics and Asian/Middle Eastern Languages and Asian and Pacific Studies.

The Certificate requires 12-13 units to include:

How to Apply for the Certificate

(1) Fill out the Certificate Enrollment Form and and send to [email protected].

(2) Register and pay for the certificate.  You can register, and pay for, courses for the Certificate in any of two ways:

Frequently Asked Questions for the Certificate

Does it matter in what order I take the Certificate courses?
There is no required order, except that KOR 301 must be taken before KOR 302.

Is there a time limit for completion of Certificate coursework?
No. 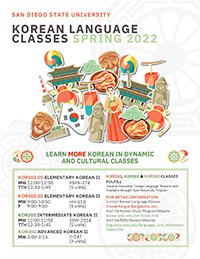 KOR 201. Intermediate Korean I (5)
Prerequisite: Korean 102 or completion of the third year of high school Korean.
Acquisition of grammatical patterns of complex sentences. Expansion of vocabulary and phrases in expressing ideas in various settings. All four language skills emphasized with cultural competency. Not open to students with credit in Korean 202, 301, or a higher-numbered Korean course.

KOR 301. Advanced Korean I (3)
Prerequisites: Korean 202; and completion of the General Education requirement in Foundations of Learning II.C., Humanities.
Spoken and written modern Korean. Acquisition of complex sentences with advanced grammatical patterns. Development of fluency in conversing on a variety of topics in everyday situations.

KOR 490. Practicum in Teaching Korean as a Second Language (3) Cr/NC Six hours of activity.
Prerequisites: Native or native-like fluency in Korean (through proficiency test) and consent of instructor.
Supervised experience and practicum in basic methods of teaching Korean, culminating in a written report. Students will be assigned to appropriate class sections within selected Korean language classes as tutors under staff supervision. Maximum credit six units.

I am an American student. I studied Korean for 2 years in Korea. I can read and write Korean but I still need to take a Korean class to improve my knowledge of Korean language. Which Korean class do you recommend?

How many different Korean language classes are currently offered at SDSU during the academic year?

Do I need to take placement test to enroll Korean classes?

Placement tests for Korean Language Classes are not offered at this time. However, you need to get approval from the instructor for a Korean class.

Can I use Korean classes to fulfill GE Requirements?

Yes. You can take Korean classes through Open University Program at SDSU.